No, not really. The universe started with the big bang.  If there was a universe before this one, all information about it was destroyed before this one started. How the heck is there a day or night without the sun? Day and night is caused by the rotation of the Earth.

This one always confused me. What the heck are the waters and waters? Space is in no way watery. Where did the light come from? I am just picturing this globe of water that went from a dark blob of water, to a magically lit ball of water.

So now the globe of water is bisected down the center. Water on the bottom, air on the top. That makes a lot more sense than gravity and static electricity in the accretion disk causing matter to clump together. 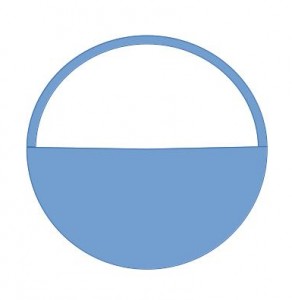 This is the Earth and the entire universe. So, now, poof, there is land supported above the waters of the deep supported by magic. I think pillars will be quoted later, but at this point, magic. Plants now, without the sun. That makes no sense. Not all plants have flowers, especially the plants that live in the ocean. Still no sun, still don’t know how there is day or night.

The stars were created to mark the seasons. All 100,000,000,000,000,000,000,000,000,000 of them. They also are just ‘up there’ somewhere. They certainly not created to light the earth. Plus, have you ever tried to read a book by star light? The sun isn’t a million times bigger than the Earth, it is just a nice light so we can walk around during the day. The moon is not a source of light, it just reflects the light from the sun. Then he created the stars, again. At least the sun exists now, so we can actually have a day and night.

And God said, Let the waters swarm with swarmers having a living soul; and let birds fly over the earth on the face of the expanse of the heavens. And God created great sea-animals, and every living soul that creeps with which the waters swarmed after their kind; and every winged fowl after its kind. And God saw that it was good. And God blessed them, saying, Be fruitful and multiply, and fill the waters of the seas and let the fowl multiply in the earth. And the evening and the morning were the fifth day.

Finally, all the other animals.

What is this ‘us’ shit? I thought there was one god? God is an ape, since we are created in our image? We are certainly apes. We could rule all the animals on earth, but we should probably share the earth.

Back to the singular god now. Man and woman were created on the sixth day, together. Remember this. No way any mammal could survive the terrible inbreeding, starting with just a single pair. 30 individuals is about the very lowest limit, even then, it is really dicey. Also, there are a heck of a lot of poisonous plants out there. I don’t think you can eat every animal on earth, think fugu.

And God saw everything that He had made, and behold, it was very good. And the evening and the morning were the sixth day.

Good, very good, that chapter is over. Come to think about it, I will now make it a challenge to read the whole Bible, cover to virtual cover, with my running commentary.

This site uses Akismet to reduce spam. Learn how your comment data is processed.